Getting Ready for Christmas Jigsaw Puzzle 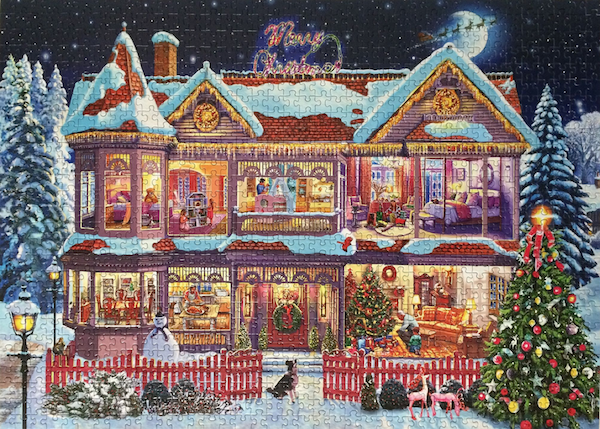 The snow along the bottom and the dark sky across the top were a little tricky. Snow patches and black starry skies usually are. I had singled out the Merry Christmas text which was then done first on the board followed by the Christmas tree, red fence, reindeer, dog and other greenery. From there I worked all the lighter color areas in the rooms, placing them into position on the board. Eventually the lower roof and front doorway were completed. After that, all the rooms were completed until I was down to the starry sky and white snow. Those 2 areas took the longest time with the sky being the longer of the two as it extended the puzzling time for this puzzle to about 12 hours. However, I have had a lot bigger sections of dark sky and snow on different images but this one was not a negative at all! 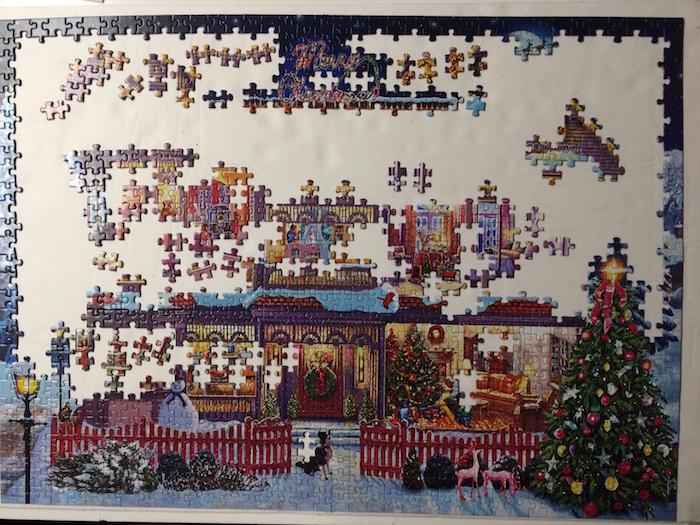 Steve Crisp has a website that shares many of his remarkable painting. Several major brands produce his artwork into jigsaw puzzles and they are extremely popular. It's worth taking a look. Click Here

These images share the great quality of this super fun Eurographics jigsaw puzzle. It is really nice to see these images in the larger size so you get a better view. You cannot really see the small details just looking at the finished picture.

Eurographics Ready for Christmas Jigsaw Puzzle is a perfect puzzle experience....it's super fun to see these delightful the family busy in their home preparing for Christmas....kinda share with you a warm-fuzzy moment. This puzzle comes highly recommended indeed!