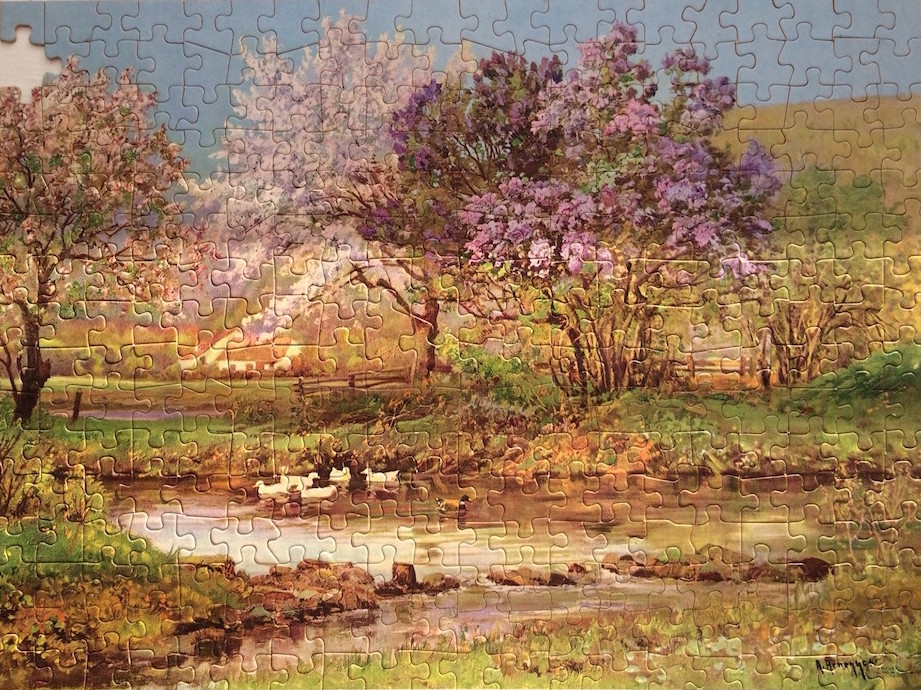 The pieces smell aged (not smoke), are thick, with puzzle dust (still) and the texture is almost an oil paint feeling.

The Artist, Alois Arnegger became famous as a scene painter around the 1920's where his focus was more on Italian coasts, such as Naples, Capri or Sanremo. That said, this is one of those images where the brush strokes of the brush tends to distort the individual jigsaw puzzle pieces but then you will see the actual image form in front of you.

Research indicated that the Lilac Time Jigsaw Puzzle by the Majestic Series sold around the 1940s to 1950s. Look closely in the box image below - the upper left corner has writing that says "Sept. 11/64 One outside near corner piece missing".

The next image to the right is exactly the way this was packaged in the inside. The Puzzler had separated the outer edge from the other pieces and placed them into separate bags. I even remember those brown-lined bags too.

I decided (with respect to the previous owner) to leave the Lilac Time jigsaw puzzle intact the way I purchased it. I do not have a price for it but I know it was not very much at the Thrift store. I found it among a selection of about 20 other semi-vintage jigsaw puzzles and this one appeared to be the oldest.

Lilacs are one of my most favorite smelling flowers. I can tell from this image that the real scene would have been lovely. Now I have added it to my completed collection.