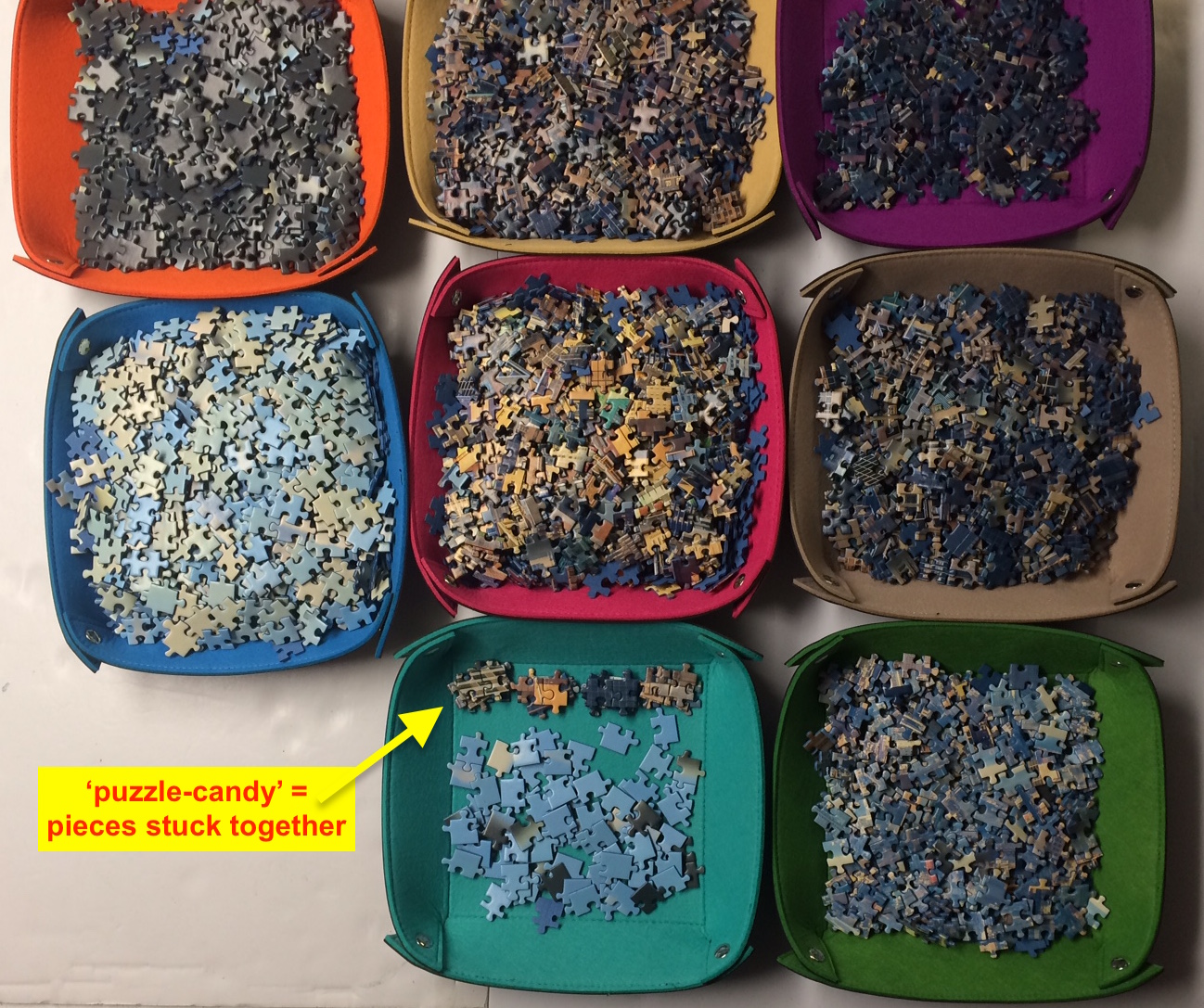 I was contacted via Facebook from ByAllison. They offered to send me their product for review. I certainly don't have a problem doing that.  I usually sort all the puzzle pieces into piles and have used other puzzle trays. Often the piles go straight from the first sort to being laid out onto foam boards. However....

I thought I would take the opportunity to test the ByAllison's puzzle trays on my current puzzle I have on the table - the Ravensburger 32,000 pieces New York City Window  jigsaw puzzle.

So, the package came in a timely manner and packaged well, with no damages to the box. Once out of the packing box, I lifted the top cover of the 'good quality' box, open . You can see how well the trays sit - nice and snug in the box. From there, I opened up the '4 arms' that 'seal' the trays into position, being held down with velcro strips. Continues below...

I took each tray out and snapped the trays in the corners (very easily) so they would have depth. The goal would be to sort the NYC Window 2nd bag which holds over 4000 pieces. I emptied the bag into 2 puzzle boxes. From there I started the sorting process of all the pieces into the eight different colored trays. Eight trays seemed to be more than enough for the first round of sorting of bag #2.

Once I finished the sorting, which took about 2 hours, most of the trays were adequately filled...so that was over 4000 pieces sorted into 8 trays.  IF I was doing a 1500 piece puzzle I could easily stack all 8 trays into each other then seal them up with the '4 arms' securely as (shown below) that is what the product is made for. That said, I did attempt sealing my 8 full trays with the 4000 pieces and they did (just barely) fit  - BUT!! that is not how this product is supposed to be used. SO do NOT attempt that.

instead of using the outer casing, I sealed all 8 trays of puzzle pieces into clear plastic bags with twist ties as shown below. Now I will continue to use the trays as we start Bag B of the NYC Window puzzle. Even though I am not using the outer shell in my case, I know I will find these trays very useful for the next 6 bags of my NYC Window puzzle AND I the pieces get decreased in each of the trays I will be able to use the outer casing for storage and transporting the pieces to different locations.

I cannot say enough about the quality of this product. The felt is very thick, the trays are solidly stitched, the colors are very pretty and the overall packaging is very appealing. If you like using puzzle trays, then I can highly recommend the ByAllison jigsaw puzzle trays for long term enjoyment.

You can find ByAllison on Facebook here. The details found on their Amazon link  to purchase the trays, shares the following details:

There's also lots of positive reviews for these trays on Amazon as well.