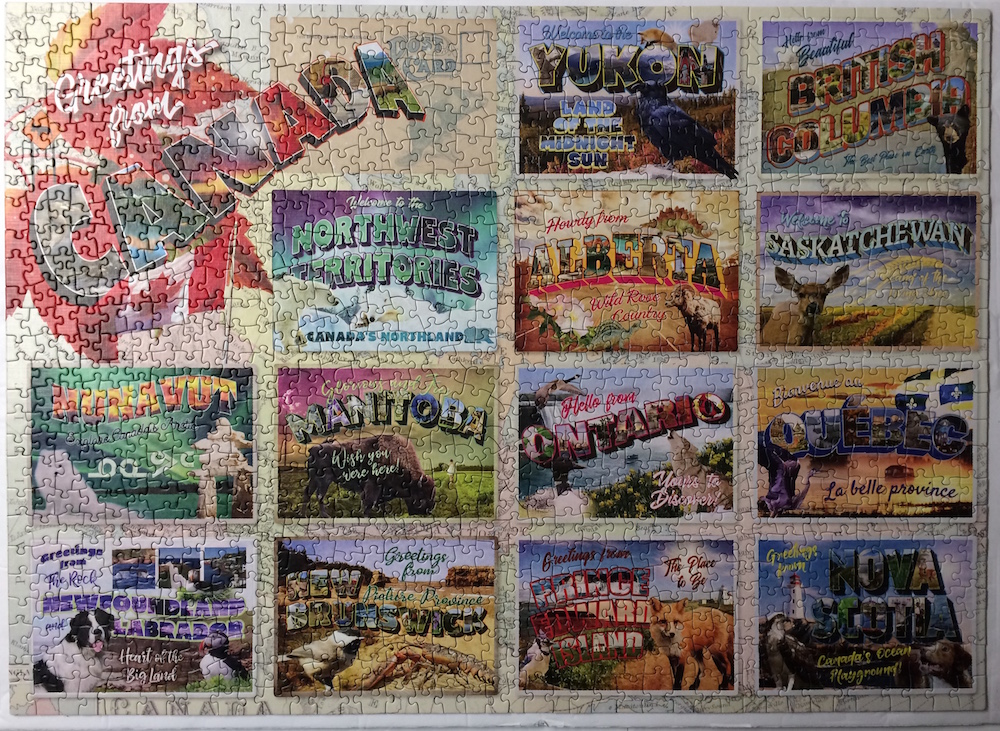 The Greetings From Canada puzzle is a very nice way to describe main features of each Province in Canada. It is a collage type image so it is like doing several little mini puzzles in one!

I figured the red and white text "Greetings From Canada" and the rusty-colored Maple Leaf along with the red and white Canada flag would be the best place to start which would build on the 'CANADA' text. I could see the Provinces text might be tricky however it turns out the upper left corner shown in the image below to the left was the most difficult part of the puzzle and I completed that first - the rest of the puzzle went together much easier.

So once the Greetings From Canada and CANADA text was completed it kinda built into the bluish Northwest Territories which built into the surrounding Provinces which expanded that process across the entire puzzle.

For each of the provinces I looked for the correct text and colors until a good portion of all the Province text was asembled as shown in the image below to the right. Then to finish off from that point was quite easy and quick.

I love the way this one looks when completed. It's clean, organized and colorful with the trickiest area in the upper left corner but not difficult enough to spoil the experience.

The following images share nice closeups to see the random cut pieces which are non-glared and fit great. Also each Province image represents the Province's logo for what is it known for. One thing I did note is that Manitoba vehicle plates state 'Friendly Manitoba'  however I see they opted out for the Buffalo - Glorious and Free which has more impact!

Out of all of the Provinces I have only lived in Ontario, Manitoba and Alberta. I have not visited any of the other provinces. I am proud to be a Canadian and grateful that I live in this country. This puzzle will be a keeper for the wall with many thanks to Cobble Hill Puzzle Company for giving me the opportunity to sample this terrific Greetings From Canada puzzle.