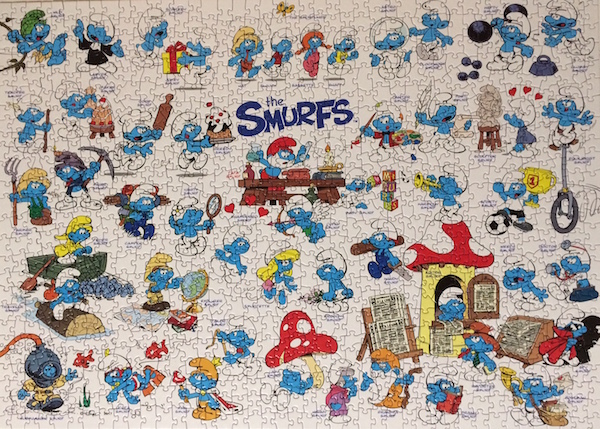 The Smurfs Jigsaw Puzzle reminds me of the day when my daughter watched them on the TV as a 4 year old child. I was really drawn to this image when I saw it.

I then decided to organize the Smurfs according to colors and eventually got to the text or names of the Smurfs. .... the Artist's signature at the bottom was in a different position and the block image on the bottom right covered the corner area. I seen a smaller image on the back of the box but I had to use the magnifying glass to see the image...still, small deterrents that need a mention.

I love the way this one looks when completed. It's clean, organized and colorful. It may have added some extra tricky areas with the white edges and white/blue pieces, but it was not enough to discourage the experience.

The following images share nice closeups to see the random cut pieces, the crisp and colorful characters and even the blue printing is readable.

Smurf trivia..... "The Smurfs are all one family with 1 father and 99 kids. According to Spirou magazine N° 1354 from 1964, there are 100 Smurfs in total; this does not take into account later additions from the Smurfs films." Credit Wikipedia

The Smurfs Jigsaw Puzzle is one of 3 jigsaw puzzles I was offered to review for the Cobble Hill Puzzle Company. As with most of their jigsaw puzzles, I do highly recommend this one, if not for the extra challenge then just for the image of these cute little characters.

You may enjoy the Matilda jigsaw puzzle along with many other Cobble Hill images.

The Smurf jigsaw puzzle has a few others in the series...