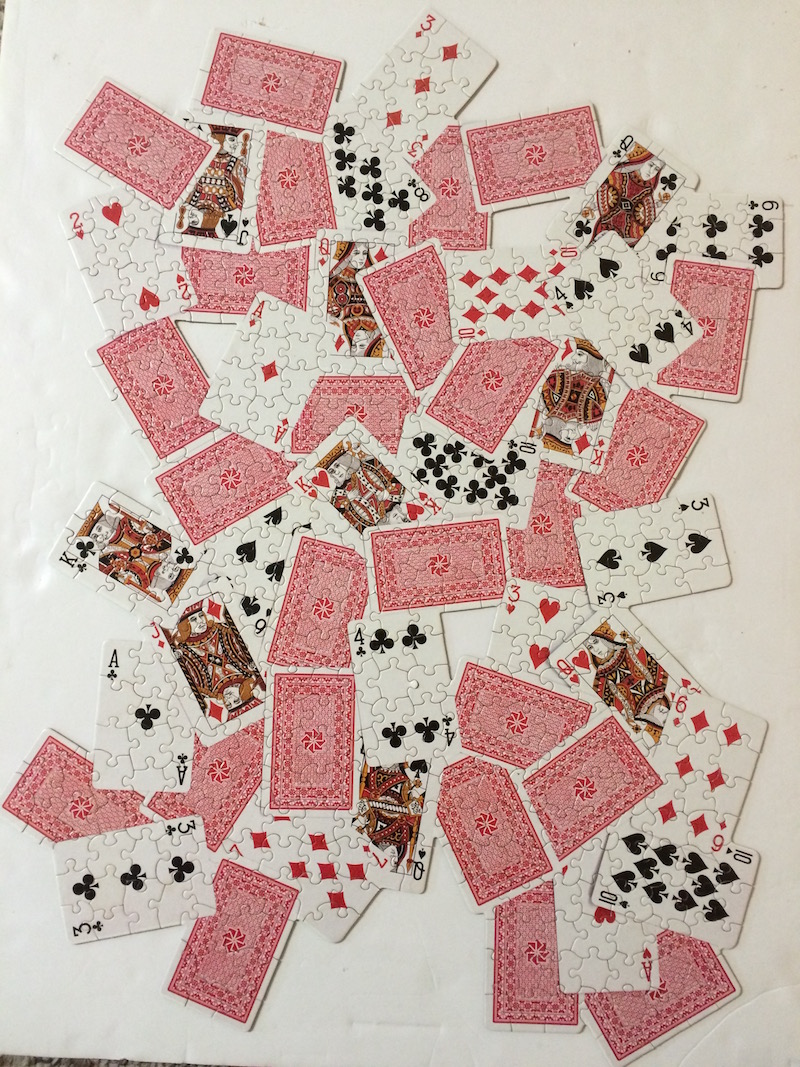 So I continued with working just patches of cards into different areas - pretty much whatever I could find to match. Eventually I was able to place enough card-patches to organize them into the actual image.

It ended up that I finished as much black cards as possible, then the reds, then the Aces-Kings-Queens-Jacks which left the red cards. I tried to use the 'biggest' white patches on the pieces first, then the pieces that defined the card-borders, then I had the left over pieces lined up according to shapes.....that went much better than I thought it would.

You can see in the images below there are sections that actually have holes in the puzzle itself to give the image the 'thrown-52-card-pick-up Game' look. And of course there are 52 cards there in the  52 Pickup jigsaw puzzle.

Ceaco calls these the CONVERSATION PIECES line and this one was produced in 1999. "They are known as Trompe-l'œil which is an art technique that uses realistic imagery to create the optical illusion that the depicted objects exist in three dimensions. Forced perspective is a comparable illusion in architecture." (Wikipedia)

I have owned this puzzle for a few years in my collection and maybe saw it done once before July 1st of this year. However, I have ALWAYS wanted to see it completed and on my wall. So that Jigsaw Puzzle Connections Group member inspired me to tackle it.

I have to admit - it was challenging THAT's for sure. Of course it took me longer than a usual 500 piece puzzle would normally take but I have to admit - this was like one 'big-juicy-steak' of a puzzle and I am not sure if it was my determination or what but I was not discouraged at any point - I just kept forging on forward to assemble it.

Now it is on my wall where it belongs.....I also had the pleasure of assembling the Classic Car and the Glow in the Dark puzzle by Ceaco.