I purposely tried this one to see what the Glow level would look like.  You may not be able to see the pink sticker circled in the image above but it says $2.00. This one came from the Thrift Store.

Seems like the previous owner used it a few times as some of the layers were peeling off the pieces however to my fantastic luck - ALL the pieces were there!

The pieces were kinda messed up in 5 different bags so once I determined what was what, I completed the borders on the 300 and 500 pieces.

The 100 piece Titled 'End of Time' (not sure why it was titled that) was altogether in one bag so I did it up very quickly. Then I took close up photos because I could see the 'Glow-lines' on the puzzle shown here.

You can see some of the grey 'Glow-lines' on the Castle Beneath but not really on the Dolphin Dreams.

I am satisfied that the price was right and all the pieces were included. However, in hopes that the puzzle was well used, the pieces were peeling AND the Glow-lines were weak and not visible at all with my camera.

We purposely hovered the completed puzzles on boards under extreme bright lights before bringing them into the 'dark-black' room.....we could only slightly see the Glow-lines and my camera would not pick any lines in the pictures.....sadly of course.

I was really looking forward to seeing these Glow in the Dark because Jean Coelho did a party pack of 10 Glow in the Dark Ceaco's and his look fantastic!!! You can see them on this article AND definitely worth the time to LOOK : CLICK HERE 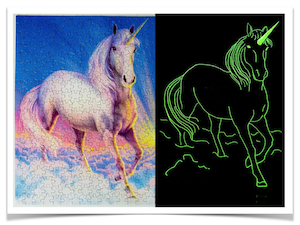 So now I have to rate this puzzle as a Medium due to the glow but it could be because it was already used.

You may also like these Glow in the dark puzzles...