I want to sincerely thank my jigsaw puzzler friend Antônia Sobral from Brazil who was so thoughtful to create, produce and then send me this jigsaw puzzle treasure - I am deeply touched and grateful for our connection.

I have been following Antônia Sobral as she has combined her Architectural skills with her passion for jigsaw puzzles and her creative artistic skills into beautiful productions of unique shaped, designed and fabulous coloured jigsaw puzzles. Her custom cut jigsaw puzzles are very high end quality from a mindful thought that blossoms into a work of art that deserves to be appreciated by many as it is displayed on the wall. Her collection should really be a travelling Exhibition however at least you have the option to see videos, photos and more information about her right here in this article.

The letter 'L' shaped puzzle overlaps to form the shape of the puzzle. The board is extremely high quality and the pieces fit nice and quite snug. 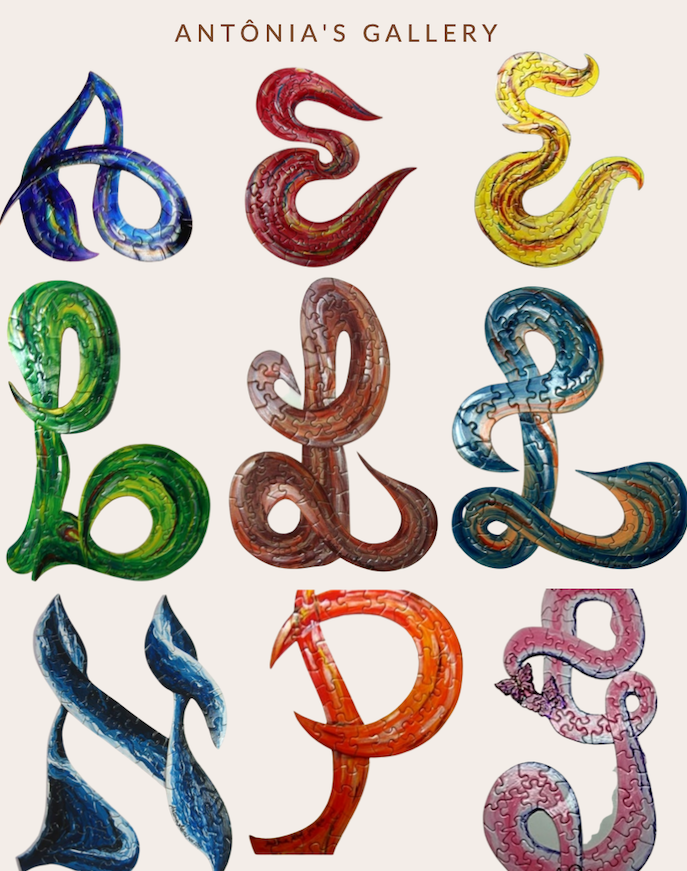 How did you come up with this idea of creating jigsaw puzzle letters?
I wanted to give a gift to some people who encouraged me to go on with my work, but I wanted the gift to be unique and very particular to each of them. I also wanted it to be a sample of the techniques that I have created for my puzzles; so it was important that I made something that could rotate, as it is with the Seahorse puzzle, or had overlaps and ups and downs, as it is in the Snake puzzles. Then the idea of those people’s initials came to my mind. 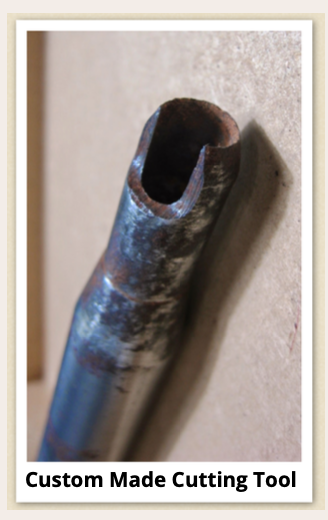 How long does it take to create one from start to finish?

It took me an average of three days to complete the whole process, because each puzzle was a different size and had a different number of pieces. The work was distributed as follows: one and a half days for drawing, painting, gluing to the base, cutting along the outlines, sanding, cutting into pieces, varnishing and assembling for review. And another day and a half for making the box. Of course, we are talking about very small 50 to 80- piece puzzles.

What materials are you using for the wood, paints and cutting tools?
First, let me make it clear that the puzzles are made of cardboard rather than wood. I use two types of cardboard: one is widely used in crafts in general, and the other one is more frequently used in architectural scale models. The choice of cardboard grade and sturdiness is made aiming at the perfect fitting together of the pieces, as we, puzzle lovers, know how unpleasant it is to try to assemble a puzzle whose pieces won’t hold after being put together.

I use several different techniques and materials for painting. I've made some paintings using varnish only, others using oil pastel crayons, and I am currently using acrylic paint. Each material has its characteristic and produces its kind of beauty in the outcome. For the snake puzzles, I also used a crackle finish varnish to get the snake skin effect I was looking for.

When it comes to cutting, I use knives which were made especially for me. In the beginning, I started talking to people from hardware stores, until they referred me to a gentleman who had a lathe. He very kindly adapted a hole cutter so that I would be able to cut half a circumference and gave me the steel tool as a gift. (Please see page 29 for photo of the tool). Later on, being an Architect, I drew the knives according to my needs and took the drawings to a knife manufacturer. In order to make the cuts, I have to hit hard with a sledgehammer. You need strong biceps (!!) but also care and delicacy of touch so that nothing goes wrong.

So I made my first puzzle, primitive but very efficient. I gave it to my sister Maria Olga who didn't know about the image. It was the first time that a handmade puzzle surprised anyone. She loved the gift and it was the stimulus I needed.

My kids and I always had puzzles as a hobby. The spacious house made it possible to transform the architect's drawing board into a table to assemble large puzzles, as there were already those with 1000, 1500 and 3000 pieces on the market. As soon as the children's school holidays began, we bought a game with many pieces, we organized ourselves with auxiliary boxes to separate them by colors and shapes, each of us with a spoon in our hand - since the pot of hazelnut cream "Nutella " was part of the ritual - and there we spent about 2 hours a day.

Yes, I do puzzles manually, using a knife system, in fact very manual. The passion for assembling puzzles led me to this, when around the year 2001 I wanted to buy one whose image was of a little boy in black and white, sitting on the floor, dressed in 20s clothes, but it no longer existed on the market. It was then that I had the idea of using old family photos to try to create one similar to that one.

If you don't mind, do you have a cost price to create one?

I price my puzzles based on the number of hours spent on the job, the amount of effort and difficulty involved in the making, and the rather intangible factors: innovation and artistry itself. I generally add 10% to that price to cover other expenses such as materials and tools.

As I buy the materials wholesale – and therefore the materials bought to make one puzzle end up being used to make some others – and as the knives have to be replaced from time to time because they cannot be sharpened, it is very difficult to determine the exact cost price of a single puzzle. But I can give you an idea of how much I would charge for one letter-puzzle in Brazilian currency (reais).

I’m asking R$75.00 for a 50 piece letterpuzzle. If you change that into Canadian dollars, as the Canadian dollar today is worth R$3.76 reais, it would be around $20.00 in your currency today. (values change everyday, so we have to check how much one Canadian dollar is worth at the date of purchase. It varies a few cents up or down, according to the markets, politics and tourism).

I should also add that shipping is a little costly. Depending on the weight and size of the puzzle, it may double its cost or may even be more expensive than the puzzle itself.

Brazilian born and having majored in Architecture and landscape Architecture, I was married and had 3 children and we were living in a place where we produced seedlings.

Jigsaw puzzles became a regular hobby in my family but for someone like me, who saw so many trees spring up from my hands, there was still one more project: creating my own puzzles!

My passion for jigsaw puzzles led me to that when, around the year 2001, I wanted to buy a puzzle and realized it was no longer available in the market. The puzzle in question was black and white, and pictured a little boy sitting on the floor, wearing clothes from the 20s. I, then, had the idea of using old family photos to try and create something similar to that one.

And that's when it all began. I made many experiments and had the help of several people until I could find the tools and supplies that became my current working materials and until I finally reached the level of quality I considered acceptable.

I started gifting loved ones, then I made many custom puzzles and I was finally able to put two pleasures together: creating my own art and turning it into jigsaw puzzles.

In 2017, I broke my right shoulder and tried to go on with my work after recovery. I started making small pieces, such as earrings; after that, I made some kids’ growth chart rulers and some other small puzzles, but I soon realized that I was pushing my body to the limit and it was time to stop.

My last puzzle was drawn on special paper made of banana tree leaves, which a friend had given me many years ago. This last puzzle is called “The Hug.” I was finishing working on it just as COVID-19 broke out in my country and, consequently, confinement started. The lack of family life began hitting us harder and, at that point, I looked at “The Hug” and made up my mind: I am keeping this one! I’ve had it framed and it is hanging in my living room, right as you enter the house, welcoming all those who come visit us.

All the other puzzles were given out. Some were handed to acquaintances who asked for them; some were kept by my children but most of them were offered through Facebook and I was happy with the demand.

I entered a period of creative silence. I did not intend to go on with that work.

Until one day, I got to see 3D objects being printed and wondered if that could be the path to enable a series of copies of my overlaying puzzles.

It seems that 3D printing will make that possible. I have made a new project, but I am still dealing with manufacturing problem solving.  I am looking forward to the conclusion of this challenging process. 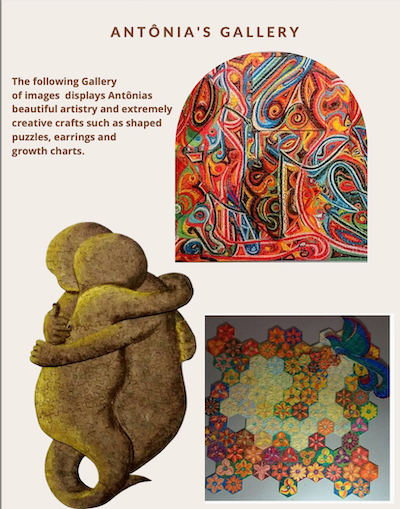 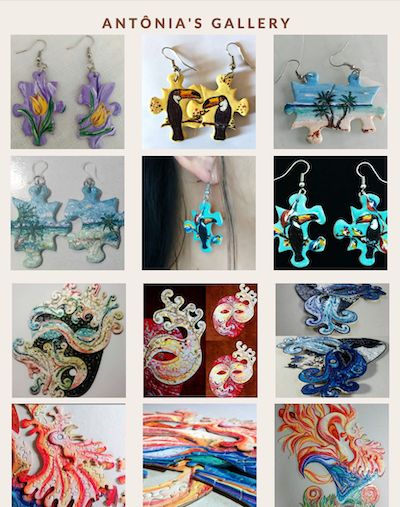 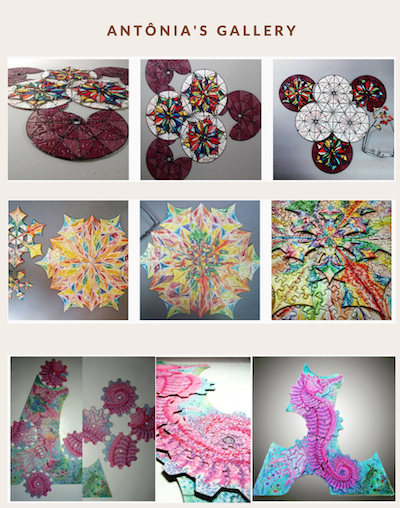 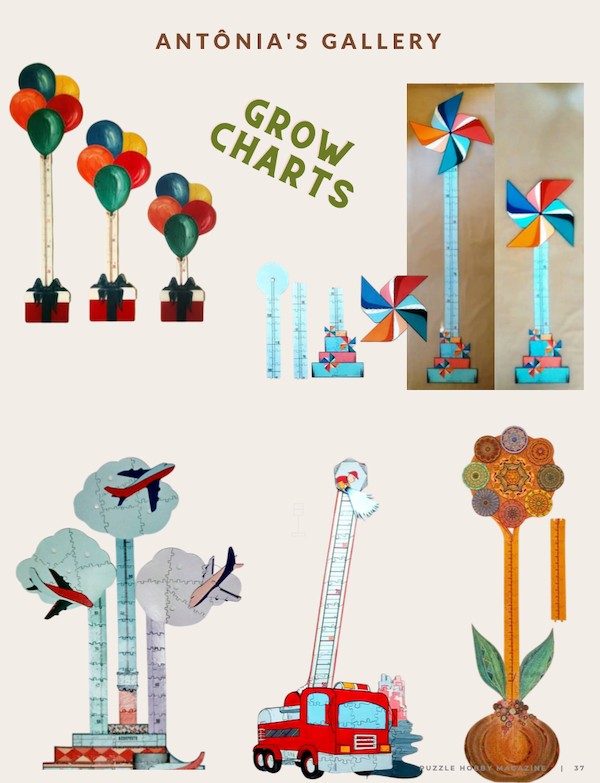 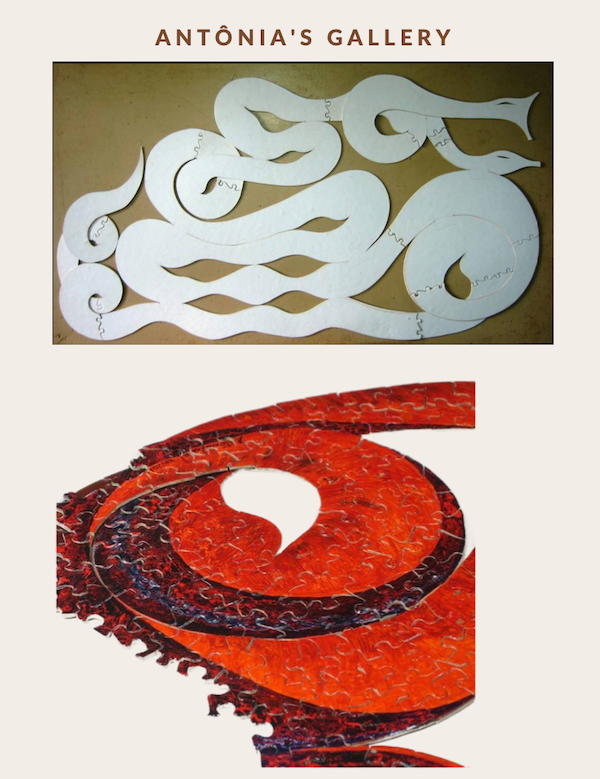 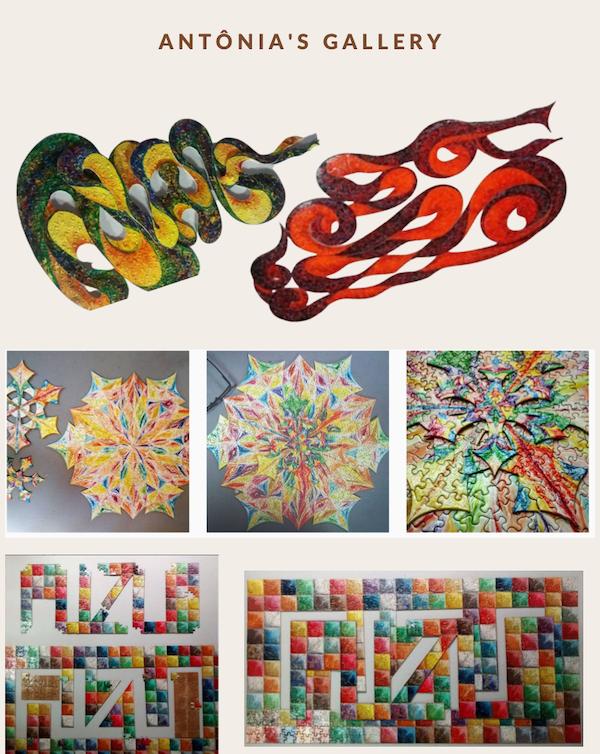