My jigsaw puzzle hobby collection lies in front of my very eyes for me to enjoy. I have often glanced over at the Krypt Jigsaw Puzzle by Ravensburger and have been tempted so many times but also intimidated too…….pure procrastination had set in.

That’s been going on for about 2 years now since I bought it at a Thrift Store for a meager $2.99 (Canadian). The box was open and it was not bagged in the inside not leaving much hope for all 654 pieces to be inside. 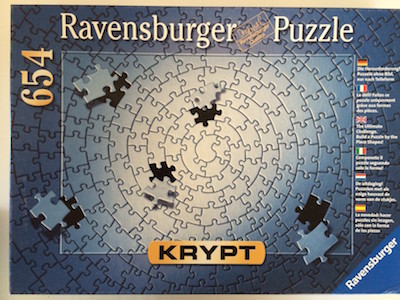 Then a few of the Ladies in the Jigsaw Puzzle Connection Facebook Group organized a Krypt Silver Spree back in December 2016 with a start date in the New Year 2017. We decided that January 7th, 2017 would be a good weekend to start. So I rearranged my schedule to accommodate time to work this one.

The three other Ladies were Jenn, Judy and Sherry. Their progress photos are posted at the end of my post. We also have a special mention at the very end so read on. The order of completion was Sherry, Judy, Linda (me) and Jenn, however the completion times were based on the available time we had surrounding other obligations over the weekend. There was no set time and this was not a contest.

Ok, if it takes me 12-15 hours to complete a challenging 1000 piece puzzle then how long should a tricky 654 pieces take? Should be less, right? Well I timed myself and total time was about 17 hours – that’s quite a long time for that amount of pieces.

So what should be my strategy for this one? I would have to start with sorting the pieces to see what I am dealing with….On the box cover and the image on the back I can see the shapes are quite odd…..after all, it claims that no two pieces are the same. I found myself actually stacking pieces of the same shape only were different sizes – that’s interesting to note. So once I realized that, I started to sort them and organize them on the foam boards according to their shapes and then sorting them down to their sizes. I was not sure if that would help or not. 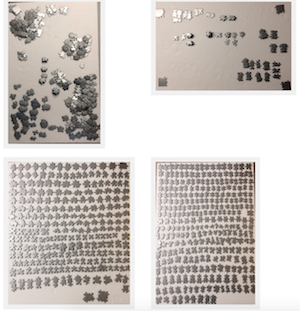 Next came the border….it was somewhat of a hassle to get together as some of the pieces “seemed” to be exactly the same….but such is not the case…..so I replaced and replaced and replaced until I felt like all the pieces fit well enough – not really knowing for sure and that took me two hours just to get it to that point. I was focused quite deep. Look at this tense border! 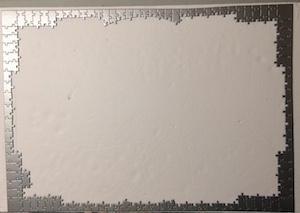 So what was next…..well I liked the small pieces that appeared to be the middle so I decided to start there…now this following photo took me 2.5 hours. That really is a long time for this amount of pieces completed here. But it certainly kept my attention and the time just blew by……. 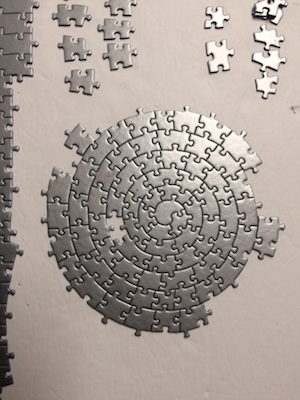 Once I felt I used up most of the major small pieces in the middle I decided to start with the larger pieces that were shown on the 4 corner areas……some of these pieces were fairly large pieces – keep in mind that this 654 pieces measures to be 20 x 27″ or 70x50cm. That’s the size of many 1000 piece puzzles. The following photo shows the sides completed  which took 1.5 hours….again not much for the time invested. But looks pretty impressive since I managed to get the circle connected. 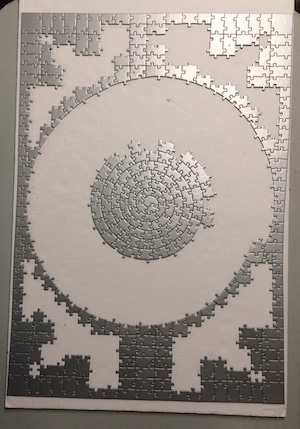 From there I continued with the outer circles which took an additional 4.5 hours….I felt like I was moving fast when I seen a bit of a pattern forming but they were only in the corners and each one was it’s own pattern…..strange but true. 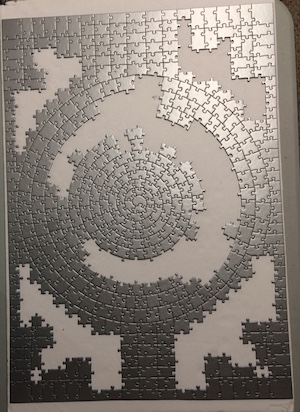 Now it looks like the end is in site but the pieces are getting more challenging and the Ladies in the Group encourage me to continue as they are very close to where I am if not more. Which is fine because this is not a speed contest by any means. However an additional 5.5 hours of total focus and concentration I found myself counting the pieces that were left compared to the pieces left open on the board. At 38 pieces left I discovered that ALL the pieces would be there…….that was the BONUS indeed after 17 hours of  puzzle laboring and late nights! 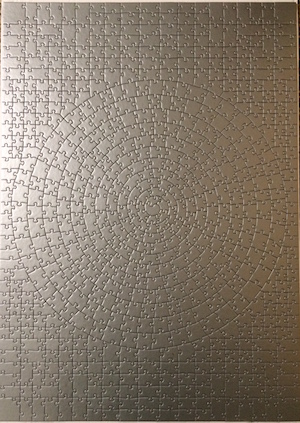 You would never consider a silver jigsaw puzzle to be beautiful but I certainly do consider this one to be. I just love looking at the pattern. I did find that I did miss an image while doing this one, however the time past so quickly while I was intensely focussed on it that I did not miss the image for long. Take a look at the close up photos by clicking on them.

I will be keeping this one because it will make for a great conversation piece indeed. I hope to find a decent frame for it from the Thrift store too – the color of the frame will make a huge difference and I have not decided what that will be just yet.

One final note; the silver on the pieces reminds me of the silver tinfoil used in cigarette packs way back in the day….I am not sure what is used in cigarette packs these days so I do not want to make that assumption.So there it is…..one that I wanted to complete for a very long time and with the help of Jenn, Judy and Sherry, my Krypt spirit was boosted enough to swing into action and get’r done!!!! So many special thanks to them.

Sherry Langlais was the first to finish hers rather very quickly! She is a pro-puzzler and enjoys these challenging types.

Judy Fisher Moulder was the second one to finish hers, making good time. She worked hers from the sides and then inwards.

Jenn Hale completed hers although it was round 2 for her. She had assembled this one some time ago, broke it up and back to the box. This time she kept it for her wall.

So now I would like to take this opportunity to thank the Ladies who participated in the Krypt Silver Spree gig with me AND all the other Puzzlers who supported us and encouraged us to keep going on this very challenging puzzle.

Also, we recognize the importance of our dedicated Puzzle Buddies  who are committed to us through every day of our lives including puzzling;

Now that was one great show!!!!