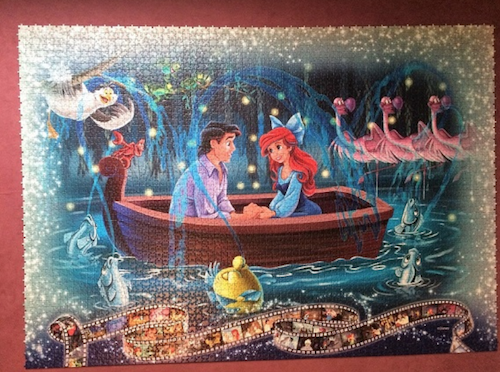 The Little Mermaid was the sixth section assembled and ended up being the one I enjoyed the most. There was a lot of blue in this section, but there were plenty of characters to break up the monotony and I absolutely loved it!

I tried a different tactic with The Little Mermaid; I decided to try assembling the "edges" first. I watched a YouTube video of a group of friends assembling this section and I was fascinated that they started with the "twinklies". Why not give it a try? I was the only one working on it, I could do whatever I wanted! It might be great or it might be a nightmare, the only way to know was to try.

(Also, the pictures got a little worse because I was terrified of moving the board too harshly and causing another avalanche of pieces. It got a little better eventually, after the sting of my mistake wore off.) 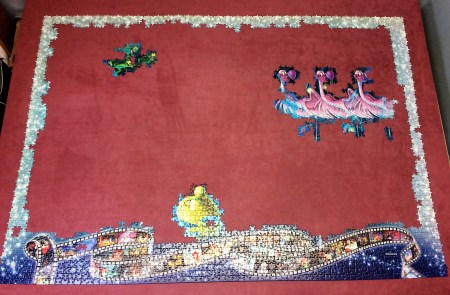 It seemed a bit tedious at times trying to find the right twinkly bits, but the sides first experiment was a success! It felt more like working a regular sized puzzle, and it made me happy that everything was approximately where it should be on the board.

The picture above is after about 6 days of work, it took more time to look like good progress was being made, but I enjoyed myself and that's really the reason for the puzzle, isn't it? Flounder looks good, the flamingos are too cute, and those little splotches of dark green near the top are 3 frogs. We're on our way and looking great! 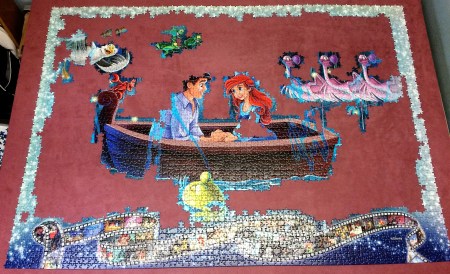 Ariel and Eric are mostly done, as are Sebastian and Scuttle, and almost everything shown is connected together. The boat went much more quickly than I thought it would and is the connection between all the smaller sections. 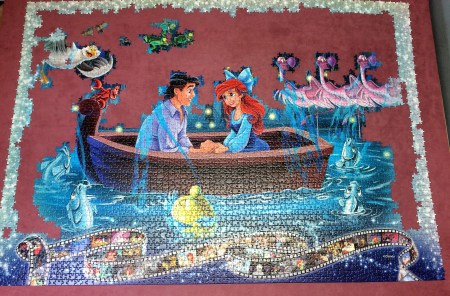 Things are starting to get filled in now, and they're looking good. Although the fish are close to the same color as the water they were easy enough to pick out and assemble, and the "motion" of the water lessens the difficulty of all that blue. You can't tell from the picture, but those small points of light are fireflies and for some reason I really enjoyed assembling each one and I think they look amazing in the finished image. At this point there are about 1400 pieces left, and almost all of them blue - oh my! 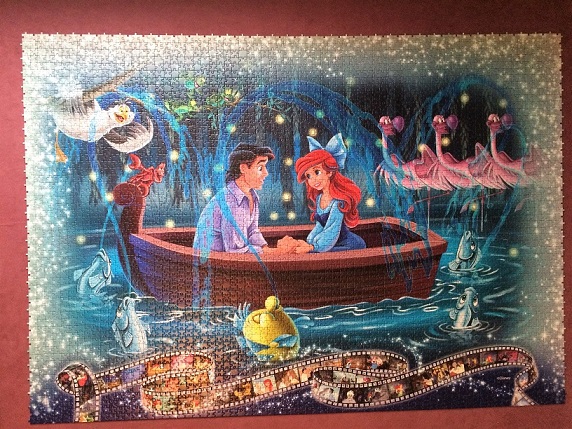 As always, the completed section is beautiful! I enjoyed this one so much, although I don't seem to be able to articulate why. Everything in the image works together so well and it was just a joy to assemble. From start to finish The Little Mermaid took 14 days. I wasn't rushing, just took my time and enjoyed the ride.

If you'd like to see the daily progress of this puzzle click here to see the first day of assembly and click next to follow along day by day to watch it come together (along with some really interesting puzzles in between).

At this point it was almost the middle of January 2017 and Memorable Disney Moments was finally for sale in the United States; that means that at last I received my replacement bag of the Fantasia section. No more procrastinating for me, Fantasia is up next!